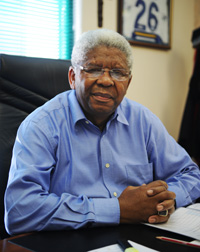 There were some new faces and some familiar ones when UCT's new Council, elected and constituted, met for the first time on Saturday 28 July.

In office for the next four years, until 30 June 2016, Council re-elected Archbishop Njongonkulu Ndungane as its chairperson and Debbie Budlender as its deputy chair. The other members elected to the Council Executive Committee were vice-chancellor Dr Max Price (ex officio), Professor Paula Ensor, Jeremy Gauntlett, Lucille Meyer, Trevor Petersen and the sitting president of the Students' Representative Council.

An interview with the chairperson of the UCT Council, Archbishop Njongonkulu Ndungane

A week or so ago, at the first meeting of the new UCT Council, Archbishop Njongonkulu Ndungane agreed to serve a second term as chairperson, following his first term from 2008 to 30 June this year. We spoke to him about what convinced him to commit another five years to the university; the challenges of his first term; and what lies ahead in the second.

Monday Paper: What have been the challenges and joys of your first term as chair of UCT Council?

Archbishop Njongonkulu Ndungane: The University of Cape Town is a complex entity with many facets to its life, and one of the greatest challenges on my appointment as chair has been gaining an overall understanding of the workings of the university. This has necessitated the reading of a vast amount of documentation which, given busy schedules, has been taxing at times. In this regard, not always receiving meeting documentation in advance of Council meetings has added to the burden. Undoubtedly, one of the highlights of my tenure as chair of Council has been working with so many gifted people, not only those who sit on the Council but also those who act in a support capacity within the university. Having this support base has made my time as chair a great deal easier, and for this I am grateful.

MP: What's made you decide to stay on for another term; what's the appeal?

NN: To be frank, there was some considerable arm-twisting before this decision was taken. I agonised a lot about whether to go on for a second term as there are competing demands on my time, and having served a first term I was more acutely aware how demanding being the Chair of Council is. In the end there were a number of reasons that I accepted the second term. In the first instance, the place that the university found itself at the time required continuity in the position of chair. This, coupled with my passion for education and the commitment of the university to provide future leadership of calibre and integrity, prevailed

MP: Is this second term one of consolidation or are you starting on fresh new projects?

NN: I suppose that it is a little of both. I believe that we, as a Council, have achieved much in the last four years, and so there is a need to continue to build on those early achievements. We do, however, live in a world of constant change and challenges and we will look to embrace these changes as part of my next term. The university is committed to excellence and this is reflected in our being the only university in Africa that is ranked in the top 200 universities globally. What we would like to see is UCT achieving greater heights in terms of its core business - that is, research, teaching and learning. Our objective is to constantly improve our global ranking, as the long-term benefit for both the university and for South Africa at large will bode well as we look to the next generation of leadership for this nation. Our role as Council is to create the enabling environment that will see the University of Cape Town achieve new heights in academic excellence and governance.

MP: Is there anything on the UCT horizon that you are particularly looking forward to, projects that are going to be worthy or of note?

NN: We do not believe that we as a university have all the answers, and will actively interact with universities from around the globe to tap into best-practice models and enhance the effectiveness of UCT. We are committed to enhancing the reputation of the university as an academic research facility, and believe that we need to be broadly collaborative in order to achieve these goals. In order to achieve these targets we will need investment, both from government and from a broad cross-section of donors, but we believe that building on the excellence of the university will have long-term benefits not only for this country but for academic advancement on a global stage.

MP: What challenges lie ahead for the university?

MP: What are your early thoughts on the make-up of this new Council?

I am impressed by the diversity of experience available on the council and the commitment of the council members to creating an environment within UCT which will allow a flourishing of academic excellence, transparency and good governance. Collectively, we support the vice-chancellor and his academic team in achieving the strategic objectives of the university in terms of excellence in research, teaching and learning. However, our role as Council does go beyond this support role to one of looking for new ways in which the university can make an impact; not only academically, but socially, and by becoming a globally recognised think tank for higher education.

The full breakdown of the new Council Members.