No blips on Rukezo's radar 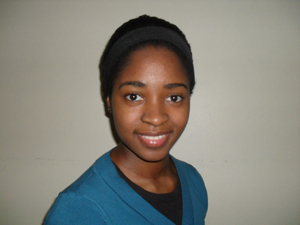 On her radar: Stacey Rukezo graduates with a master's in electrical engineering

You can run, but you can't hide.

At least not when UCT's soon-to-be master's graduate Stacey Rukezo is looking for you.

The electrical engineering student built a radar transceiver that was, in part, derived from a project originally undertaken by UCT's Radar Remote Sensing Group from 2004 to 2007. Called the South African Synthetic Aperture Radar II (SASAR II), that project was designed as a 'flying laboratory' that could provide radar images of the earth's surface.

SASAR II was later abandoned, but has regained momentum with plans by the South African Space Agency to launch a South African radar satellite within the next decade.

Rukezo's project is a modified, scaled-down version of the SASAR II radar, but uses some of the hardware from that project for a new line of research, says the Zimbabwean engineer. Her transceiver is intended as a prototype for a 'network radar', which uses multiple receivers scattered over a large area.

"This type of radar provides improved detection of moving targets, such as drug and contraband smugglers in small aircraft, and also poachers operating off the coastline," she explains.

A paper on her project, co-authored by herself, her supervisor Professor Mike Inggs and Dr Amit Mishra, was presented by Mishra at the International Radar Symposium in Warsaw, Poland.

Rukezo could not attend because of work commitments in Germany, where she is currently doing a STEP (Students' Experience Programme) internship in the department of environment perception at Daimler AG.

"This is broadening my understanding of radar and giving me much-needed practical experience," she says.

While she is currently gaining invaluable industry experience, Rukezo hopes to re-enter the academic fraternity to pursue a PhD sooner rather than later. "I feel I still have so much to learn, and the academic environment is where I can get the best exposure," she says.

She plans eventually to open a business that uses radar in commercial applications.