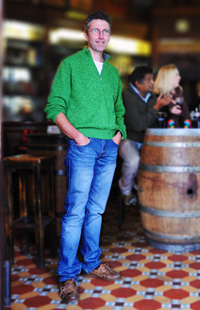 Right or wrong: Prof Bernhard Weiss suggested that a little humility is not always a bad thing when deciding which view is correct and which is not. (Download the podcast)

"It is unwise to be too sure of one's own wisdom" is one of those useful Mahatma Gandhi-isms quickly dug up after a half-decent Google search.

But that little truth was also the premise of the inaugural lecture, delivered in May, of Professor Bernhard Weiss of the Department of Philosophy. Titled Disagreement: Its epistemic significance, Weiss' lecture started off, as any good philosophy talk should, with a problem.

The problem is this: a patient goes to see two doctors – Dr X and Dr Y – about a condition, and the two come to two very different diagnoses. The patient clearly has no reason to prefer either doctor's verdict to the other.

But why should the doctors differ? It would seem that the only reason each doctor could have to stick with her own verdict is that it is hers. But that's "sheer chauvinism", said Weiss.

Given that, surely the rational step for each doctor is to reserve judgement on the matter."However, the consequences of this concessive position – let's call it 'Moderation' – are surely inadmissible," proposed Weiss.

For one thing, no one would ever have grounds to hold an opinion in controversial areas – for example, in philosophy."Almost every philosophical claim will be disputed by equally able and equally well-informed enquirers," he said. So, in the end, said Weiss, 'Moderation' would only lead to "a horrible and acute intellectual cramp".

On the other hand, sticking resolutely to one's own view at the expense of another's – when there is no reason to assume that that person is wrong – would not just be resolute, but "sheer bloody-mindedness".

Weiss proposed a solution, which he termed 'Humble Chauvinism'. It's a view that takes on the best of both worlds – a little moderation, and a little chauvinism.

"So we want some way to value our own views as in some sense privileged – we want to be chauvinists," Weiss explained. "But we want that to be tempered by the counter-evidence provided by opposing views – we want to be humble in our chauvinism."

This middle way, he went on, involves re-evaluating one's confidence in one's own belief. The contrary view of Dr X should not require Dr Y to give up her view, but at least to reappraise her confidence in its truth.

"So the suggestion is this: the evidence of others' judgements (and one's own) is not thrown into the pot of evidence and then used from a fresh perspective; rather, that evidence is used in forming a sense of one's own (and of others') reliability, which is then used in re-evaluating one's confidence in the original assessment of the original evidence.

Moreover, this way of incorporating the evidence of others judgements was motivated as appropriate when one is an engaged enquirer rather than a mere information-seeker, said Weiss.

Finally, he used his concept of 'Humble Chauvinism' to reflect on academic enquiry. Typically, academics are accorded some freedom of enquiry, but only in a "context of academic structures which institute elaborate systems of authority".

As engaged enquirers, Weiss proposed, academics should be "immune to a certain kind of deference embodied in 'Moderate' epistemology".

On the other hand, he said, as part of the enterprise of enquiry they will be involved in the business of appraising the reliability of enquirers. When institutionalised, this would require exercising an authority over their disciplines and, in the process, assuming a role as custodians of an intellectual heritage.