HIV: a cocktail of challenges 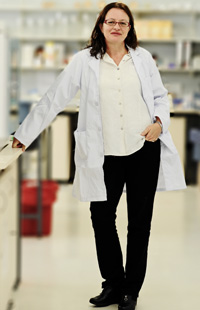 Epic story: The fight against HIV has taken many twists and turns, said Prof Carolyn Williamson. (Download the podcast)

There's been talk of 'HIV fatigue', of a public grown tired of statistics and stories and politics around the disease. But as Professor Carolyn Williamson (head of the Division of Medical Virology in UCT's Institute for Infectious Diseases and Molecular Medicine and the National Health Laboratory Service) illustrated in her inaugural lecture in May, HIV still makes for gripping listening.

In her lecture, HIV: Surviving under immense pressure, Williamson took the audience on a journey through what she termed "the greatest viral epidemic of the current time".

Firstly, she tracked the origins and the spread of the virus in South Africa. She also talked of the "pressures" she and her team of researchers have encountered in their 20 years of research into HIV.

These included political worries, such as when former President Thabo Mbeki's government appointed a panel to seek "other solutions" – while the rest of the world was celebrating the discovery of new drugs that could treat HIV, and evidence was surfacing that mother-to-child transmissions could be either curbed or prevented through the use of those drugs.

Williamson was part of that presidential panel, and described the time as "one of the darkest periods of recent South African history"."It was a bizarre experience," she recalled. "It was like living in an alternative universe, and one that had extreme repercussions for the country."

She reported that it was subsequently estimated that nearly one third of a million people died as a result of delays in rolling out anti-retroviral therapy.

There were pressures in the laboratory, too, as scientists struggled to find a vaccine that everybody seemed to be expecting imminently. Williamson described HIV as her "true passion in life", particularly her attempts to understand the progression from infection to full-blown disease, and using this work to help develop an effective vaccine against the virus.

Questions arose, about whether that progression was the same in HIV-positive people in Africa as it was among those in Europe; how people control the virus; and why people progress at different rates.

The findings were complicated, she said. For instance, a study in KwaZulu-Natal by the Centre for the AIDS Programme of Research in South Africa found that roughly 25% of HIV-positive people would need therapy within a year of their infection, based on current guidelines. About 14% of the others – so-called 'HIV controllers' – were able to control their virus to low levels, thus extending their life expectancy.

TThe individual's genes and immune system are important to the control of HIV, said Williamson.

"If the virus escapes from the immune system, it's bad news; but if it escapes in a region that affects viral fitness, or you have a good immune response which prevents it from escaping, then the person is better off."

But despite the many advances, there is still a vast amount to be learnt about HIV and AIDS, said Williamson.

"The truth is, despite 20 years of intense research, we don't understand all the reasons why people are slow or fast progressors. That is an area for further study."

To Williamson's mind, vaccines are the best weapon to control HIV, she said in closing

One candidate vaccine, the locally-developed DNA/MVA vaccine, made up of a prime vaccine followed by a booster vaccine, is currently on trials both in South Africa and in the US.