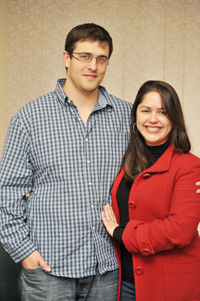 Ever together: Graduand Trad and spouse Elaine Nogueira-Godsey have more in common than most couples.

Trad and Elaine Nogueira-Godsey may just be taking their 'til-death-do-us-part thing a bit too far.

So they're married and live together, right? But they are also scholars in the same discipline, and once shared the same office - which is how they met a few years ago - in UCT's Leslie Social Science building.

In addition, they started their PhD studies under the same supervisor and at the same time. The couple had even planned to graduate together, until work and family commitments necessitated a change in schedule.

Elaine chose to take it slow with her studies and take on more of the domestic chores, while Trad forged ahead with his research into the impacts of religion on economic growth in South Africa.

Now that he's graduating - and is able to pick up some of those chores, we assume - Elaine is able to make headway with her research into eco-feminism in Latin America from a Christian perspective. She hopes to graduate in December.

The Nogueira-Godseys have so much in common that they often struggle to separate home from work and studies.

"Home is actually an extension of the office," says Elaine, a lecturer and researcher in UCT's Department of Religious Studies.

"One minute you are preparing supper, the next you are fixing a paragraph in your thesis while talking about the academic work," adds Trad.

Naturally, with all that common ground, the couple has plenty to debate. But, says Trad, they respect, support and understand each other's work.

And the bottom line, they agree, is that they enjoy each other's company all the time.