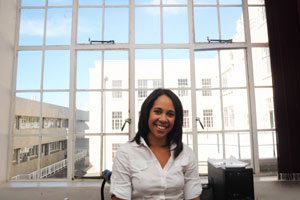 Dr Nastassja Koen - the first recipient of the Servier Laboratories Fellowship in Psychopharmacology.

Dr Nastassja Koen, a UCT medical graduate, has been named as the first recipient of a new fellowship that will focus on training in the important area of psychopharmacology.

The fellowship has been awarded by Servier, a pharmaceutical company that has previously funded research in cardiology at UCT and now has a growing interest in psychiatric treatments.

"Psychiatric disorders account for a major portion of South Africa's burden of disease, and psychopharmacological treatments are key in ensuring optimal management of these conditions," explains Professor Dan Stein, head of the Department of Psychiatry and Mental Health.

Koen is currently working on her PhD, which looks at the genetics of post-traumatic stress disorder, or PTSD. She has already published a number of articles in the area of psychopharmacology, and the fellowship will allow her the opportunity to continue her work.

Koen's research will draw on a sample of 500 mother-child pairs in the Drakenstein region of the Western Cape. This population is particularly important from a public health perspective, and will allow her to assess the impact of disorders such as PTSD and depression during and after pregnancy on infant outcomes.

"The more we find out about a disease, the more we can add to and enhance knowledge of the treatment," Koen says.