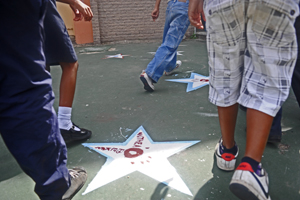 A hero's walk: A UCT student had learners from Levana Primary School in Lavender Hill name and honour their own heroes.

In a community such as Lavender Hill where residents still relate to the far-removed glamour and wealth of Hollywood but have few local heroes, school children need real role models. So student Emma-Louise Gray helped them come up with some, as part of her coursework for the final-year community development practice course in the Division of Occupational Therapy.

Earlier this year, Gray created a Hollywood Boulevard-style Walk of Fame at Levana Primary School in the underprivileged Cape township. During her seven-week stint at Levana, she had 24 grade-7 learners identify and honour 'heroes' who had also attended the school.

A pilot, a school teacher, an accountant and a famous actress were some of the heroes who visited the school to share their wisdom with the young dreamers, and were then honoured with a star on the walk.

"It is hoped that the learners will be inspired to keep working for their dreams, and will one day have their own stars painted at Levana," says Gray.

The project will continue under another student, Jamie Andrew.