Ikeys live to fight another year 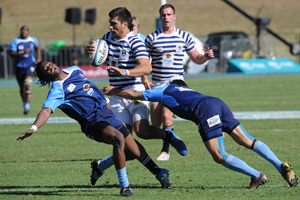 Over and out: Ikeys' Damian de Allende is tackled by CUT's Alec Mhlanga and Noel Marx in the playoff match.

Sighs of relief all round. The Green Mile will host FNB Varsity Cup rugby again next year.

A disappointing season could have become a disastrous one had UCT's Ikeys not recovered from an early scare against the Central University of Technology (CUT) in the Varsity Cup promotion/relegation playoff on 9 April. After conceding a shock early try, the Ikeys cranked up the pace to thrash Varsity Shield runners-up CUT by 60-21.

Lock Levi Odendaal opened the scoring for UCT in typical forward fashion, bulldozing over near the poles. Havoc was duly cried, and eight more tries followed for an emphatic end to a season that previously featured just one Ikey victory (the obliteration of the Tshwane University of Technology's Vikings).

For the defending champions, contesting a promotion/relegation match was not on the agenda when Varsity Cup 2012 kicked off. But, unable to shake their initial underwhelming form, the Ikey Tigers were forced to fight for their lives in a curtain-raiser to the final.

Before the match, UCT captain Ntsolo Setlaba had mentioned how eager the squad was to build a solid foundation for the future. "We're all looking forward to putting the Varsity Cup behind us and building towards next year," said Setlaba.

And, with UCT assured of a place in next year's Varsity Cup, all eyes could turn to the final, in which the University of Pretoria's Tukkies gave the Maties of Stellenbosch a 29-21 rugby lesson to clinch the crown. The win marked the first time in the competition's five years that the Cup silverware has left the Cape.