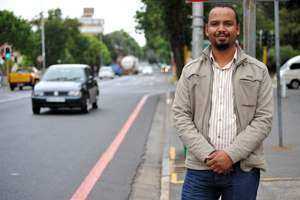 Roadworthy: Edward Beukes, who receives his PhD this week, showed in his thesis that some Cape Town roads are giving planners plenty to think about.

It's perhaps fitting that the first completed doctoral work to come out of UCT's Centre for Transport Studies should set a scene.

In particular, Edward Beukes' thesis, titled Context-Sensitive Road Planning for Developing Countries, defined, mapped, clustered and classified - pooling reams upon reams of data - the very complex tangle that makes up Cape Town's roads system. For his thesis, Beukes employed three particularly long arterials as case studies; namely Voortrekker Road between Salt River and Bellville, Lansdowne Road between Claremont and Macassar, and Koeberg Road between Maitland and Table View. (As a side project, he ran a similar although computationally more demanding exercise for the entire Cape metropole.)

He then looked at the contexts of these three roads; ie how the land around them was being used, the socioeconomic status of the communities along them, the environmental make-up of the surrounding areas, and the transport systems in place. He then quantified and, for ease of use, clustered these contexts.

Finally, based on the contexts, Beukes described the relative suitability of five transport modes - car, bike, public transport, freight and pedestrian - along the three roads.

As expected, any one road is a mishmash of contexts. Voortrekker Road, for example, is a mix and match of six clusters. Public transport would be the best fit for one stretch of the road, for example, but less suitable for the next kilometre or so, and a good match again a few kilometres further on.

His work is a more sophisticated and nuanced modelling exercise than is typical for road planning, which is usually based on traffic volumes, Beukes believes. It could also feed into infrastructure planning, such as that required by the new South African Road Classification and Access Management Manual, and could be applied across the developing world.

"The context changes from one section of a road to the next," Beukes says. "All that I've done is come up with a way to put a number to that context, to describe it in a logical way with some data behind it, and to use that information to make recommendations for contextually appropriate road treatments."

Beukes' work was supervised by Associate Professor Marianne Vanderschuren of the Centre for Transport Studies, based in the Department of Civil Engineering.