Rhythm and meaning in perfect English 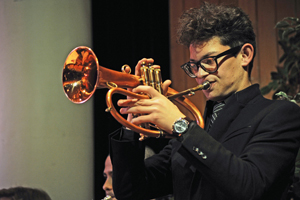 Jazz, said French artist Henri Matisse, is rhythm and meaning. American musical legend Thelonius Monk, on the other hand, claimed that he didn't have a definition of jazz: "You just know it when you hear it."

The honours music student blew the judges away as he chalked up unprecedented scores of one hundred percent for his performances, which included renditions of jazz icon Dizzee Gillespie's Bebop and Ray Noble's Cherokee.

News of his perfect scores was even sweeter music to the pace-setting trumpet player's ears because, soon after, he was notified that his honours dissertation had been passed with distinction.

He describes his surprising relaxation on stage as he performed the record-breaking routines.

"There was a free-ness about it," he recalls. "I thought I'd be tense."

Then his face lights up as the adrenaline from that night pumps through his veins once more.

The 21-year-old English's talent has not gone unrecognised. Monday nights spent jamming at jazz club Swingers have seen him forge lasting relationships with luminaries such as Alvin Dyers and Nicholas le Roux.