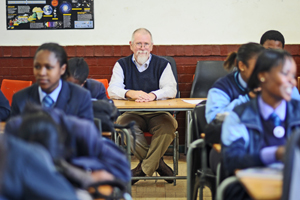 Back in the benches: Dr Jonathan Clark has been appointed director of UCT's new Schools Intervention Initiative, which will explore new ways to improve local and national schooling.

Dr Jonathan Clark has been appointed the director of the university's new Schools Intervention Initiative (SII).

"This initiative," said vice-chancellor Dr Max Price, following the announcement of Clark's appointment, "will draw on our broader resources to assist the government in improving the quality of education in South Africa, and explore different models of university-school partnerships."

The SII builds on the already extensive work of the Schools Development Unit (SDU), of which Clark is also director, and is a spin-off of another UCT initiative - Edulab.

Edulab (the name inspired by the CityLab initiative of UCT's African Centre for Cities) is a consultative forum that, in 2010, brought together different role-players in the university ? both staff and students with an interest and involvement in school education.

A decision coming out of Edulab was that the SII should focus its initial attentions on one single geographical area, namely Khayelitsha ? although Clark is at pains to point out that this focus will not exclude involvement with other schools in other communities. Rather, Khayelitsha will serve as a useful starting point.

"Though schooling in the township certainly experiences a myriad challenges, the central issue is primarily not one of access, but of quality," Clark says.

In the primary schools, proficiency levels in numeracy and literacy are low; and the cumulative effect of years of underperformance results in poor secondary school matriculation pass rates, he explains. In 2010, the average pass rate for matriculants in Khayelitsha was 50.3%, well below the provincial average of 76.8%. That mark was even lower than that of the troubled Eastern Cape education system, where the pass rate last year stood at 58.3%.

"A direct consequence of the under achievement and failure of schools in the township is that unacceptably small numbers of matriculants from this community gain entry to our university, and those that do are under prepared and consequently struggle to succeed."

One of the initial goals of the SII, says Clark, is to "engage practically, developmentally and critically" with the problems that beset schooling in communities such as Khayelitsha, drawing on university-wide resources and initiatives, including student organisations; while at the same time building local collaborations between UCT and other education-related groupings outside of the university.

At the beginning of this year, UCT launched the 100-UP programme in Khayelitsha. Five Grade-10 learners from each of the 20 secondary schools in the township were selected to participate. Over the course of the next three years, staff and students from across the university will work with the SDU on a comprehensive programme that aims to better prepare these learners to compete for places at UCT at the end of 2013.

Not only will the SII look into the quality of educational provision - an area in which the SDU boasts an established track record through its work with teachers - it will also explore different models of university-school partnerships.

"As we seek out ways of forging strong, responsive university-school partnerships, we can learn much from the experience of others. Elsewhere in the world there are a number of university-assisted community school programmes that provide powerful evidence of how institutions such as UCT can be partners for long-term, positive change in the community."

The SII's focus on Khayelitsha also marks Clark's return to familiar territory. He taught at Luhlaza Secondary School from 1987 to 1991, and served as a physical sciences curriculum advisor in the area for a further four years. From 2000 to 2007 he was principal of COSAT (The Centre of Science and Technology), a special project school of the Western Cape Education Department, based in Khayelitsha.

"I feel honoured to have been chosen to head up an initiative that sends a clear signal that UCT intends to play a greater role in supporting the State's efforts to overcome the legacy of apartheid education," he says. "At times the challenges might seem overwhelming, but there are many positive interventions that we can offer."

Clark officially stepped into the SII position on 1 October. He will divide his time 60:40 between the SDU and the SII.

"Elsewhere in the world there are a number of university-assisted community school programmes that provide powerful evidence of how institutions such as UCT can be partners for long-term, positive change in the community."