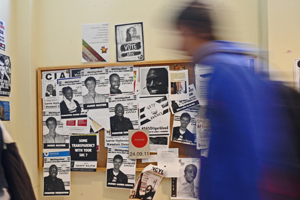 The election poll was 37% this year, slightly lower than last year's 38%, although a record 40 candidates took part.