Divas and dancers - Spotlight on women at VC Concert 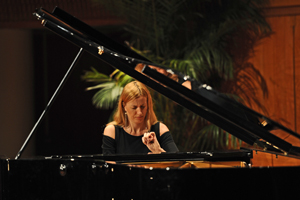 Wednesday night's Vice-Chancellor's Concert at the Baxter Theatre Centre featured a smorgasbord of talent from the South African College of Music (SACM), the performers and programme tailored to reflect a milestone in UCT's history this year: 125 years of women on campus.

Dubbed South Africa's 'Divine Diva', Aviva Pelham introduced each item on the programme but first paid tribute to UCT's women pioneers, such as Dr Mamphela Ramphele, UCT's first black and first woman vice-chancellor, and former First Lady Graça Machel, UCT's first black and first woman chancellor. (Pelham herself is a pioneer, having performed at the Baxter since 1966. She still contributes to the SACM as a part-time staff member.)

Vice-chancellor Dr Max Price responded in kind in his welcome to staff, listing numerous luminaries among UCT's women staff and students, and noting that women make up 55% of the student body.

"We've come a long way, and this concert is dedicated to them."

To the audience he said: "Thanks to you, our staff, and to your spouses and families who lend you to us each day - and sometimes at night and on weekends."

Wednesday night's performance was the first of two consecutive evening concerts. Each item was a highlight, from the quartet of flautists to Amanda Tiffin and the UCT Jazz Choir and UCT Jazz Voices, which showcased the vocal talents of Leah Adams, Margot de Bruyn, Sade Ross, Vuyo Sotashe and Chad Zerf.

Alumna Kathleen Tagg was a joy on piano, performing works from Franz Liszt and Earl Wind.

Mindful of the theme when he introduced the Opera School, director Professor Kamal Khan was apologetic: "Opera is often about giving women a hard time!" he quipped.

The school's riches underscored Pelham's observation that "the world is snapping up our students".

Women were not the only ones in the limelight. Bass-baritone Thesele Kemane's rendition of William Bolcolm's The Story of Black Max (as told to the De Kooning brothers), was directed pointedly at UCT's own Max, to the delight of the audience.

To end the evening Dizu Plaatjies and his troupe of drummers and dancers saturated the concert hall with their rhythms and energy. Plaatjies runs an after-school programme to empower young women and his young dancers. Well, they stole the show.

Now to find a way to bottle that energy.

View the photo album of the performances.