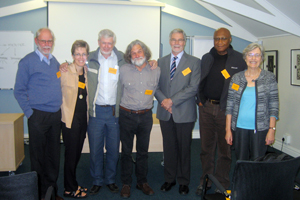 Running since 2006, the Visiting and Retired Scholars Mentorship Project is a prized initiative in the UCT arsenal to develop and nurture the next generation of scholars.

Funded by the Andrew W Mellon Foundation, it taps into a rich vein of international research experience by recruiting retired UCT scholars living in South Africa and a selection of distinguished scholars living overseas to mentor up-and-coming young researchers at UCT. (There are some 40 such researchers on the project's books right now.)

Recently, the Research Office hosted its annual project get-together for mentors and protÃ©gÃ©s. By chance, there are no fewer than four visiting mentors at UCT at the moment - a rare event, according to the Research Office's Wilna Venter - plus three retired scholars.

The visiting mentors stay at UCT for two stints of at least two months each over any given year.