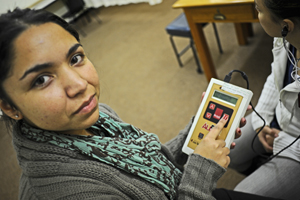 An earful: Tracey-Lee Cloete illustrates the use of a machine to measure otoacoustic emissions, a key component in her proposed hearing-screening protocol for young school learners.

But it could just be that they can't hear, as UCT clinical educator Tracey-Lee Cloete and many others suspect. Also, everyone agrees that early screening and intervention could avoid a spate of learning and social difficulties.

So Cloete, who this week graduates with a master's in audiology from the Division of Communication Sciences & Disorders, has spent the past two years researching and developing a hearing-screening protocol, based on an existing pool of tests, for Grade-R and Grade-1 school learners; a critical contribution to priority health care, according to the division's Associate Professor Harsha Kathard.

Cloete had to keep context in mind in drafting her protocol. It had to suit both testers (school health workers stretched for time) and subjects (fidgety, not-so-articulate toddlers).

So she ditched the low-tech, flawed options such as voice and rattle tests that can be subjective and unreliable, and proposed a three-step, more hi-tech alternative.

This includes the use of more objective, if pricey, technology. There's the run-of-the-mill otoscopy, ie a visual examination of the ear with an otoscope. That's followed by the measurement of otoacoustic emissions - acoustic sounds generated by the inner ear that can point to faults in the cochlea, the portion of the inner ear essential for hearing - and a tympanometry test that examines the condition of the middle ear and eardrum (aka the tympanic membrane) by bouncing low-frequency sounds off them.

Cloete then tested her protocol in a small trial with school health workers and about 100 Grade-R and Grade-1 learners in Mitchells Plain.

Results were mixed. The health workers liked the time-saving and precise technology, but her sensitivity numbers (the number of learners correctly identified as suffering from hearing loss, compared to specificity numbers, which correctly identifies those who don't have any hearing loss) stood at only 57-58%. However, that could be because of a delay between the screening test and the follow-up diagnostic test, because of the poor attendance rate.

The protocol, while showing promise, has to be refined, Cloete notes. And costs, she realises, could be a stumbling block, as the machines for the two tests run, to just over R50 000 together.

But that's very little compared to the personal and system costs (lines of people sent to hospitals on the findings of incorrect test results), she argues. "We're saying, yes, the set-up costs will be higher, but in the long term there could be savings."