From domestic worker to master's graduand 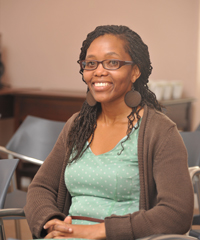 Turning the corner: Thabisa Xhalisa graduates with her master's this week, having arrived in Cape Town with R50 in her pocket - and few prospects - some nine years ago.

The saying 'education is the key to success' best suits Thabisa Xhalisa's case.

Graduating from domestic worker at the age of 15 to cleaner, to translator and, finally, to becoming a lecturer, Xhalisa has beaten all the odds in her life. This week she graduates with her master's in education.

But her journey has not been a walk in the park.

Having to raise two kids and look after her niece and a cousin following the death of her mother, Xhalisa could well have joined thousands of township youngsters trapped by poverty and circumstances.

"I grew up in poverty and I was tired of it," she recalls. "I did well at school, but had no hope of studying further. At some point I thought I was meant to live in poverty."

Becoming a restaurant waitress was what many young women in her community aspired to after matriculating.

With only R50 in her pocket, two skirts and two T-shirts in her bag, Xhalisa then left her home town of Knysna in 2002 en route to Cape Town to investigate tertiary education. At first, UCT turned down her application to study medicine as her marks were not good enough. But when she could not afford the R1 000 registration fee at another university, Xhalisa returned to UCT to try again. Advisors at the university suggested she study humanities. But she lacked even the R300 acceptance fee. However, after securing a loan bursary, the R300 acceptance fee was incorporated into her fee account.

"That was the difference between UCT and other universities. Their system is accommodative to even those who have absolutely nothing"

Since then Xhalisa has made UCT her home, obtaining her BA in media studies in 2005, her honours in African languages in 2007, and her master's this year. She intends to do her doctorate, and make a documentary about her mother.

"My life is a replication of hers, but my future is better because I have education."