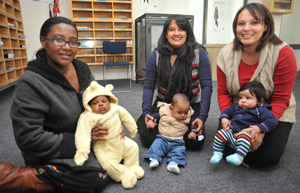 Beating the odds: (From left) Julie Kahumuza with Cedric, Rushana Larney with Imaad, and Lauren Williams with Ethan, all juggled studies and motherhood.

If studying while working is tough, then adding parenthood into the mix just adds to the juggling act.

Five UCT students - Julie Kahumuza, Rushana Larney, Kuben Ramsamy, Justin White, and Lauren Williams - have experienced that first-hand when they became parents in the middle of their Postgraduate Diploma in Business Administration studies at the Graduate School of Business. They pressed on, however, and will graduate this week.

"There were many times I was about to give up during the course, due to late nights and long lectures," commented Larney, who gave birth to her third baby, Imaad, late last year.

But knowing that the course was a once-in-a-lifetime opportunity, and that quitting would let down her family and study group, Larney kept going.

As with the others, it was critical that she manage her time and responsibilities well, she says.

Kahumuza, a mother of four, was better used to the predicament, as she had also fallen pregnant when doing her master's degree four years ago. She gave birth to her son, Cedric, in March.

She believes that a delicate balancing act is required, but that it needs to be backed up by support from (and sacrifices by) family members.

"It was also important for my group to establish ground rules at the beginning of the course, and understand each other's circumstances," Kahumuza explains. "With this understanding, we were able to design a strategy that limited our time away from home and work, while still fulfilling the requirements of the course, and ensuring that the experience was beneficial to all."

Tough as it may be, being a parent should not deter anyone from studying, concluded Williams, whose second baby, Ethan, was born early in 2011.