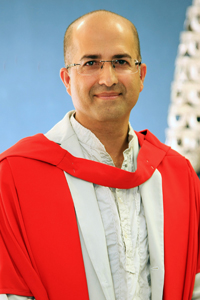 It's in the air: Prof Mohamed Fareed Jeebhay presented his research on occupational asthma in the fishing industry at his inaugural lecture on 20 April.

The rise of occupational asthma, particularly in the fisheries industries, took centre stage at Professor Mohamed Fareed Jeebhay's inaugural lecture, From Farm to Fork - A Fishy Story of Allergy and Asthma, to a packed theatre on 20 April.

Over the past decade, Jeebhay, who is based in the Centre for Occupational and Environmental Health Research (COEHR) in the School of Public Health & Family Medicine, has focused his research on the relationship between airborne food allergens and allergy and asthma. He paid special attention to identifying the occupational risk factors for disease, in order to develop strategies for prevention.

While the vast majority of published reports focus on allergic symptoms following ingestion or skin contact, it's the lesser spotted route - the inhalation of aerosols - that Jeebhay addressed in his presentation.

"Aside from the commonly encountered oral route in domestic settings, seafood also finds its way into the human body through inhalation in domestic, recreational and work settings," he said.

In both shellfish and fish factories, airborne wet and dry particles are produced during processes like boiling, bagging, degutting and mincing. And it's these particles, containing aerosolised allergens, that are inhaled by workers and that, much like household allergens that feed off a genetic predisposition, cause allergy and inflammation of the bronchial tract, resulting in rhinitis and asthma.

The first case report of seafood allergy was reported in 1937 by the Norwegian bacteriologist Arent de Besche, who wrote of a fisherman who developed allergic symptoms and asthma when handling codfish. This report sparked Jeebhay's interest in occupational asthma.

Not surprisingly, allergies went hand in hand with the growth of the seafood industry.

"The increased demand and consumption for seafood and its by-products has been associated with a concomitant rise in fishing and aquaculture activities. Aside from the potential depletion of marine stocks if not managed in a sustainable manner, recent studies suggest more frequent reporting of allergic health problems among consumers as well as processors of seafood."

A study of some 600 workers by Jeebhay and his co-investigators along the west coast of St Helena Bay, the epicentre of fish harvesting and processing in South Africa, showed that symptoms of work-related asthma may develop either after only a few months or after several years of commencing work.

Yet, numerous studies show that a large proportion of occupational allergy and asthma remains under-detected and poorly managed, despite the knowledge that work-related factors are responsible for between 15 to 30% of adult asthma.

Jeebhay's research not only accounts for the cause and prevalence of the disease, but looks to identification, prevention and cure. Molecular studies identified several forms of seafood proteins, some known as parvalbumin, found in indigenous pilchard species that have been linked to seafood allergy. Jeebhay and his group have subsequently developed a model of fish allergy that could be used to test different recombinants of allergens, a model that can be used in immunotherapy, which is currently not available for those who suffer from seafood allergies.

"Exposure control measures include eliminating exposure or worker relocation," he said. "This can be done by identifying high risk activities for aerosol exposure such as fishmeal bagging and gutting machines, and the introduction of improved local exhaust ventilation systems."

Download the podcast of the lecture or view the video below: