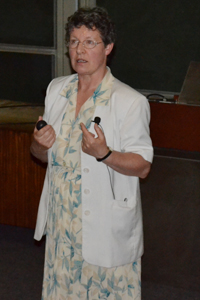 The end of the world - Earth as we know it - is not nigh. Not for the next billion years, anyway.

So says Dame Jocelyn Bell Burnell, who delivered a public lecture on Will the World End in 2010? recently. The lecture was hosted by UCT's Astrophysics, Cosmology and Gravity Centre and was part of the second Middle East-Africa International Astronomical Union regional meeting that took place in Cape Town from 10 to 15 April.

Bell Burnell is a visiting professor at Oxford University and a Fellow of Mansfield College. During her postgraduate research at Cambridge University, she, together with her supervisor, Anthony Hewish, discovered radio pulsars.

Misinterpretations of the ancient Mayan calendar ending in 2012 has spurred scores (a simple Google search for end of the world 2012 renders some 56 million results) of opportunistic, pseudo-science citings that this would signal the end of world. The movie 2012 didn't help much, either.

Nothing sells like the promise of a pending apocalypse, right?

But what do experts say?

There is sound scientific proof that the astronomical phenomena and conspiracy theories that are cited as potential causes (solar storms, planets or asteroids crashing into earth, planetary alignments, or Earth being swallowed by a black hole) are unfounded, said Bell Burnell.

"The real threat is that people don't know enough science to realise that they're being misled."