There are some 229 first aiders, 281 safety, health and environmental (SHE) representatives, 400 evacuation marshals, and 14 radiation protection officers on campus. And that's just staff. In addition to these amazing individuals who volunteer their time, all Campus Protection officers and traffic officers are in possession of a valid first aid certificate.

First Aiders are trained in at least Level 1 First Aid, which covers basic first aid (CPR and general medical emergencies). Each trainee is issued a certificate of course completion by a person/organisation approved by the Health & Welfare SETA or Chief inspector of the Department of Labour. They repeat the course every three years. 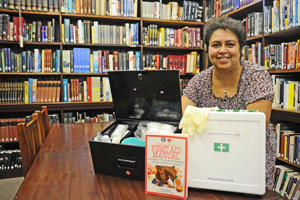 Safety's not a gadget, but a state of mind: Hiddingh Hall Library's Kashiefa Shade has been a first aider for more than 15 years.

SHE representatives are those responsible for the overall safety and health of the working environment they have been appointed to.

Kashiefa Shade, a senior library assistant at Hiddingh Hall Library, carries a kit for every calamity. Shade's been a first aider for more than 15 years, but she's also a SHE rep and fire marshal. "I'm always on duty," she quips. "Thankfully, nothing too serious has happened. Mostly, it's nasty paper cuts. But the students here do sometimes operate heavy equipment, and they need to know where to come, and what to do, in case of an emergency."

She adds: "Staff and students are responsible for their safety too. People sometimes just ignore the alarm during fire drills. That same bell could signal a very real threat." 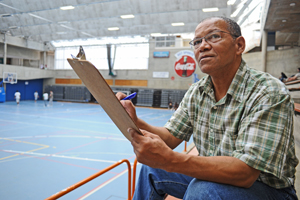 Precaution's better than cure: Jeffrey Johnstone, SHE rep at the Sports Centre, says many improvements have been made to ensure that safety comes first.

Not an inch, bolt, or fire canister of the Sports Centre escapes the scrutiny of shift supervisor, Jeffrey Johnstone. He really is the all-round handy person here, and can tell you more about its never-ending labyrinth of nooks, corridors, and courts than well, anyone. He's been here for 31 years, after all. He's also the in-house SHE rep, making him responsible for staff and students' safety while indoors or on the adjacent sports fields.

"I was nominated as a SHE rep in 1999," he says. "My duty is to ensure that all equipment is intact, that the environment is safe to work and play in, and to report and record any injuries. The SHE rep programme is great. It allows me to act as its eyes and ears, and make recommendations to management. There have been some serious accidents that have led to big modifications and improvements here."

Improvements include the rail-reinforced spectator seating, a hydraulic basketball stand, and safety signs to boot. "And still students hang on the basketball hoop, jump over the railings, and often empty the fire extinguishers for fun. But I only need to warn them once. They know it's dangerous."

Health and Safety
Health and safety in situ 18 Apr 2011