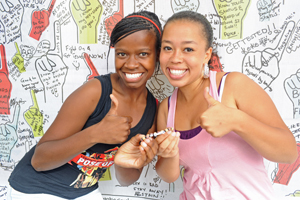 While HIV/AIDS may not initially seem a close fit with UCT's transformation initiative, a clearer understanding of the issues surrounding the epidemic (such as prejudice) can serve as a catalyst for transforming people's belief systems, says HAICU director Cal Volks.

"As such, the lessons learned in the HIV arena can further inform many aspects of UCT's transformation drive."

HAICU endeavours to equip graduates with both the professional and personal skills to respond appropriately to HIV. "This is the part of HAICU's mandate that specifically relates to transformation. It is also aligned with UCT's strategic objectives of creating future professionals and leaders who not only make a contribution to combating HIV and AIDS in their chosen discipline, but who have a strong sense of social justice. These graduates can help shift societal attitudes towards inclusivity and contribute to the creation of a society that values diversity."

"ACEs are trained to conduct HIV-awareness workshops (approximately 100 workshops throughout the year) and to create safe social spaces in which issues related to HIV, such as concurrent sexual relationships, can be discussed candidly and confidentially."

Matters such as dispelling stigma and shedding light on risk-taking behaviours (sexual concurrency, etc) are dealt with on an on-going basis at events held during term-time.

HAICU's efforts to transform UCT into an AIDS-competent community have also been directed at creating discipline-specific course components. First-year students in both the commerce and health sciences faculties attend lectures designed to stimulate their critical-thinking skills and equip them with appropriate professional discipline-specific knowledge about HIV and AIDS. HIV-related course components are also offered to fourth-year business science students and to students attending the Raymond Ackerman Leadership Academy at the GSB.

Evaluations show students of both faculties value this input: "External evaluators have found that the overwhelming majority of these students - an average of 96% - acknowledge the value of the discipline-specific aspects related to HIV," Volks adds.

HIV programmes have been piloted and positively evaluated in the Faculties of Science and Engineering & the Built Environment (EBE). Discussions are under way at those faculties, with a view to integrating discipline-specific HIV course components into the curriculum in the near future.

An important aspect of HAICU's work is research into HIV and AIDS as it relates to the campus community. In collaboration with the HEAIDS (Higher Education HIV/AIDS Programme), HAICU has also been instrumental in benchmarking HIV responsiveness at UCT, and has also conducted UCT's first study on the residence population. This appraised trends in risk-taking behaviours relating specifically to HIV.