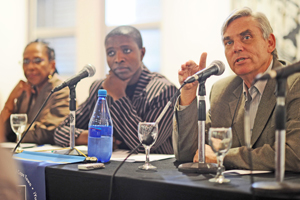 In closing: Prof Alan Rycroft closes the Month of transformation. (To his left are Zetu Makamandela-Mguqulwa, UCT's Ombud Officer, and Noluthando Orleyn of the Peotona Group.)

Rycroft, who holds the Chair of Commercial Law at UCT, said four key events at UCT will impact on the institutionalising of mediation as an important way of resolving disputes on campus.

He cited Senate's and Council's initial approval of the mediation policy in late 2009 and the corresponding establishment of the Ombud post; the appointment of Glenda Wildschut as Director of Transformation Services, which had consolidated the link between mediation and transformation; the appointment of Zetu Makamandela-Mguqulwa as the UCT Ombud; and lastly, the training of 26 mediators as an in-house resource for implementing the policy.

Rycroft and Orleyn used several examples of how different mediation methods led to innovative solutions and created a participative process whereby both parties were able to contribute to finding mutually beneficial solutions.

Rycroft said that while organisations are characterised by the need for change, the recipe of how to achieve this often focuses on notions of leadership and communication skills, instead of the need for negotiation.

"The notion that change might actually need to be negotiated is often rejected or neglected. It carries with it the dark suggestion that the leadership team does not in fact hold the golden keys. Or, worse still, the vision could be compromised in negotiation with contrary stakeholders," he said.

He added that whenever there are multiple stakeholders in the workplace who have some form of power, then proposals for change must be negotiated if other costs are to be avoided. "Because employees also exercise power - from expending minimal effort through sabotage to resignation - change should be negotiated even in settings in which the employer appears to carry all the trump cards."

Rycroft believes the practice of negotiated change (as opposed to unilateral managerialism) is vital to productivity. "Research done at leading Australian universities suggests that, generally, 'staff will not give of their best in an authoritarian workplace where they are over-managed and undervalued'." Typically, staff react to this type of managerialism by disengaging and only doing the bare minimum of teaching and research, he said.

"Negotiation is rooted in a pluralist paradigm which recognises difference and is tolerant of competing interests. It recognises that we are essentially coalitions of individuals and groups. For the health of the institution the consent and co-operation of these coalitions is a value that should not be neglected.

"The one thing we know with certainty is that conflict is unavoidable, and if not resolved wisely and fairly quickly, it tends to escalate. There is a need for institutions to design dispute systems which provide speedy, cost-effective and (where possible) relationship-enhancing processes to resolve disputes."

He described mediation as "a deeply transformative process which injects fresh energy and insight into a deadlocked situation".

"I don't know if you have ever thought how we as individuals come to change our opinions, prejudices or preferences. In my experience this is seldom an intellectual process. It is most often the result of a personal encounter in which we are forced to confront our prejudice. Mediation offers that space. It is truly a transformative process."

University Ombud Zetu Makamandela-Mguqulwa began her address by congratulating the university for acknowledging the value of Alternative Dispute Resolution (ADR) and for accordingly adopting the Mediation Policy.

She described her mandate as an organisational Ombud as "a designated independent and neutral dispute resolution practitioner whose major function is to provide confidential and informal assistance to the university community."

Orleyn said that successful alternative dispute resolution centred on the parties controlling the process, not the mediator being in control. "This element of control is the distinguishing factor."

Recalling her experience of facilitating a negotiated settlement between rebel forces and the government in Sierra Leone, Orleyn said the mediators first went on a fact-finding mission before deciding that training was the best approach. "People were too scarred and too angry." She noted that the process of resolution in SL was ongoing, and that their Truth Commission was helping the community to heal.