RAG floats up in the air 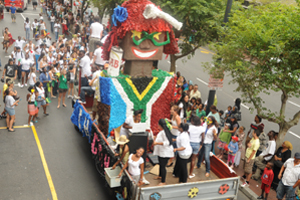 The traditional annual RAG float procession has been cancelled for 2011 due to the high costs involved.

The cost for a student residence to build and pay for a single float can run to R15 000 or more. This is in addition to costs for security on float building night and fees to the Cape Town Traffic Department. However, the money raised in a float procession can be as little as R6500 in coins thrown to the floats by bystanders.

"SHAWCO is grateful to Cape Town for the support over the years," said Varkey George, director of SHAWCO. "We are also grateful to UCT students who give their time and energy to raise more than R1 million a year to fund projects to serve Cape Town communities."

RAG (Remember and Give) is the student organisation set up to raise funding for SHAWCO. Last year more than R672 000 was raised for SHAWCO just through the sales of SAX Appeal 2010. Additional funds were raised in other initiatives such as selling UCT-branded bottles of wine at graduation.

These funds are used to finance projects such as SHAWCO's five mobile clinics and one fixed-site clinic, which provide primary healthcare through the services of about 200 medical student volunteers and volunteer doctors, and 11 SHAWCO tutoring projects in Khayelitsha, Nyanga, Manenburg and Kensington, where 800 UCT student volunteers provide tutoring to learners from disadvantaged schools.