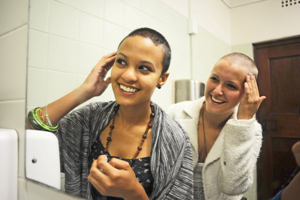 Alumna Hélène van der Merwe and her children were among UCT staff and students at the medical campus who had their hair snipped, sprayed, cropped or coloured at the annual Cancer Association of South Africa (CANSA) Shavathon on 4 March.

Their participation in the event, an awareness and fundraising drive for CANSA, was especially poignant for the family. Van der Merwe's husband, Dr Doug Banks, also a UCT graduate, died of liver cancer in July 2008.

Minutes before having her hair shorn, Banks explained the importance of taking part in the initiative: "My hair is going to grow again, but the hair loss for cancer sufferers is permanent. This is a small thing to show support of cancer victims."

After her husband's death, his friends and colleagues established the Doug Banks Renewable Energy Vision Trust, which builds intellectual capital in the field of renewable energy.

Dave Gale, chairman of the board of trustees, said: "The more funds available for cancer research, the more possibilities of finding a cure." The Commerce Student Council and the Kopano Residence's house committee also hosted CANSA Shavathon events at UCT. The initiative is growing as more people take part every year.