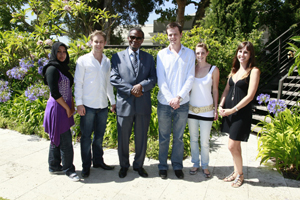 Students' Representative Council (SRC) members rubbed shoulders with high-profile politicians when they attended the Things that Unite Us conference, hosted by the FW de Klerk Foundation early this month.

The SRC delegation was among the audience that was addressed by prominent speakers, including De Klerk, Inkatha Freedom Party leader Chief Mangosuthu Buthelezi, Anglican Archbishop Thabo Makgoba, and former Springbok star Morné du Plessis, on how religion, sport, business and the Constitution can be used to create national unity.

The purpose of the conference, which was co-hosted by the Konrad Adenauer Stiftung Foundation, was to discuss the aspects of society that serve to unite all South Africans and that foster a common national spirit to aid social cohesion and tolerance. The event was particularly relevant as it was held on the 21st anniversary of De Klerk's speech that heralded South Africa's constitutional transformation process.

For the SRC, the conference allowed them to foster relationships with external stakeholders.