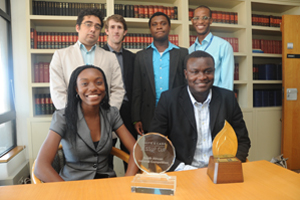 Guided by advisor Benson Olugbuo, a teaching and research assistant and a PhD student in the Department of Public Law, the team beat out the Universities of KwaZulu-Natal, Pretoria, the Western Cape and Johannesburg to win local honours. The second-year students will now compete against 110 international teams for the coveted White & Case Jessup Cup.

"It has been truly inspiring to witness the hard work and dedication demonstrated by each student participating in this competition," said Steve Raney, partner at White & Case Johannesburg and Jessup Competition Judge. "We have seen firsthand how teams of students analyse complex problems and work together to find viable solutions. These are valuable skills that will help them throughout their legal careers."

The UCT team clinched first place in a tight final against the University of Pretoria.

"The final was especially close and could have gone either way," added Raney. "Both teams should be commended for their impressive performances."

Team advisor Olugbuo attributed their success to their ability to think for themselves.

"And they put in a lot of hard work at the two practice rounds."

South African universities have competed in the Jessup since 1979, with the University of Witwatersrand winning the Jessup World Championship in 2002.

"UCT won the South African leg of the competition in 2009 and we are thrilled that the 2011 team, who gave up a substantial part of their summer vacation, are once again national winners," said Dean of Law Professor PJ Schwikkard. "Unfortunately we're unable to send the whole team to Washington, as much as we'd like to."

In its 52nd year, Jessup is the world's largest moot court competition. Administered by the International Law Students Association (ILSA), more than 2 000 law students participate each year, representing over 550 law schools from 80 countries. Students are required to present oral and written arguments on a hypothetical case before a simulated International Court of Justice.