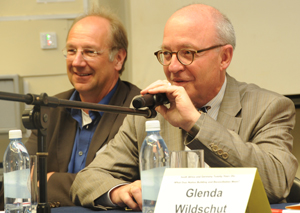 Parallel experience: Prof Nobert Kersting (left) and Hans Bussmann at the symposium on transformation in Germany and in South Africa.

Germany and South Africa are worlds apart on many fronts, but the two countries followed similar trajectories when it comes to transformation.

Those similarities were dissected this week when UCT and the German Consulate in Cape Town hosted a three-day symposium, South Africa & Germany 20 Years On: What does nation building & reconciliation mean? It was co-organised by UCT's Professor Pumla Gobodo-Madikizela of the Department of Psychology and the German Consul General, Hans-Werner Bussmann.

Among the participants were UCT vice-chancellor Dr Max Price, Professor Andreas Eckert of Humboldt University in Germany, Professor Nobert Kersting and Dr Jerome Slamat of the University of Stellenbosch, local film producer Mark Kaplan, and author and playwright Dr Sindiwe Magona. Topics ranged from the progress of transformation in the two countries and the role of youth in overcoming the recent past, to the common challenge of climate change.

Eckert spoke of challenges in academia his native country faced during the unification of West and East Germany - two vastly different nations - and how the country overcame these.

"It was difficult, it took time, but Germany now has a mixed academic scene," he said.

Price outlined developments in the South African higher education landscape over the past 40 years, in which he said radical transformation has occurred but still has a long way to go to achieve equalisation. Transformation is a long-term programme that can take between two to three generations, Price said, and the work starts with the school system.