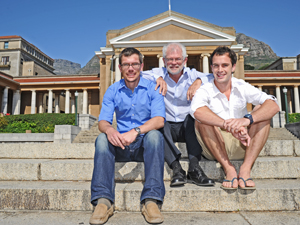 Professor Dale Hutchison is easily one of the most popular law professors at UCT, despite having to overcome a serious hearing disability. But he says his recipe is a simple one: Keep it real.

Hutchison is set to cap his two sons, Andrew and David, who have followed in his footsteps and will graduate this week.

Hutchison has what he calls "quite severe" sensorineural hearing loss (nerve deafness) in both ears. But he has not allowed this to prevent him from carving a reputation for himself as a lecturer of outstanding ability.

"It started in my early 20s and became progressively worse. Hearing aids are very good these days, but they can only amplify sound, and become less effective when the hair-like nerve fibres in the inner ear deteriorate to the point that mine have," he explains.

Now, however, science has come to the rescue with cochlear implants, with an electrode that directly stimulates the auditory nerve.

"I used to think this was a form of technology still in its infancy, but since I had my implant in January this year I have realised otherwise. I am absolutely amazed to what extent my hearing has improved," says Hutchison.

Over the years his disability has affected his teaching.

"Taking questions from the floor became rather difficult, especially since those who often ask questions tend to sit at the back of the class! Now I hope that will be a thing of the past. 2010 has been a year of adjusting to my new form of hearing, and that process is almost complete," he says.

He is extremely proud of his sons and is looking forward to that special moment when he hoods them.

Andrew (30), already has BA, LLB and LLM degrees from UCT and is now receiving his PhD, having completed his doctorate (on changes in the South African law of contract) in under three years.

"The fact that he managed to do that while carrying a full load as lecturer in the law faculty, having to prepare lectures from scratch in a number of courses, is testimony to his dedication and the seriousness of purpose with which he tackled that project. I foresee a great future for him in academic law," Hutchison says.

His younger son, David (22), graduates with a BBusSc degree on 17 December, and will then go on to complete his LLB over the next two years. He is more interested in business and legal practice than his brother, and has already shown considerable entrepreneurial flair, says Hutchison.

David received his full colours for karate from UCT this year, is a Black Belt and grades for his Second Dan on the 16th, the day before he graduates.

Hutchison's daughter, Helen (27), graduated MBChB from UCT in 2007 and was also hooded by her dad, as was Andrew at all his previous graduation ceremonies.

Hutchison says he loves teaching and is proud to have been one of the first recipients of the Distinguished Teacher Award, with former deputy vice-chancellor Professor Wieland Gevers, back in the early 1980s.

"I have no 'magic recipe', but my philosophy is: keep it as clear and simple as you can. The best legal writing is clear and logical and easy to read, not dense and convoluted; I try to achieve something similar in my lectures."

If the regard in which he is held by his students is anything to go by, it seems he does this, and then some...