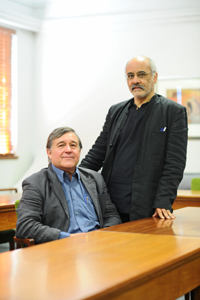 Engaging academics: Assoc Prof David Cooper with DVC Prof Crain Soudien presented a talk on engaged scholarship based on his recent case study in the US.

UCT is driven by academic conservatism, where there is a focus on basic research and an absence of appreciation of a new global academic revolution with a 'third mission' (alongside teaching and basic research) of university engagement in societal development.

So argued Fulbright scholar Associate Professor David Cooper of UCT's Department of Sociology at a presentation titled the Concept of Engaged Scholarship on 22 November.

A member of UCT's University Social Responsiveness Committee, Cooper spoke on his case study of engaged scholarship at Michigan State University in the US as part of his Fulbright work this year, which, along with 30 similar international researchers, focused on the theme of The University as Knowledge Centre and Innovation Driver.

"Where the third mission is pursued, a focus is around the 'triple helix' of industry, government and universities relations," said Cooper. "Universities need to open themselves up to a 'fourth helix' of civil society, with social science in particular becoming involved in the wide range of social research fields available, such as transport, low-cost housing and many more."

During his stay in the US, Cooper saw a growing debate on engaged research and its aspects, including public sociology, service learning - earning academic credit by serving the community - and translational research, where the National Institutes of Health is stressing the 'translation' of research findings from the laboratory to the clinic, then back to the lab for further development.

But Cooper points out that the difference between civic involvement and engaged scholarship is crucial in understanding university-based social responsiveness.

"Not all outreach activity necessarily falls under the definition of engaged scholarship," he explains. "As well as serving the community, engaged scholarship must fall within the scholar's field of study and contain some form of innovation, or new knowledge."

UCT's dual mission of positioning itself as a research powerhouse as well as an Afropolitan university needs consolidation through engaged scholarship, says Cooper.

"A line needs to be drawn between genuine engaged scholarship and mere civic engagement. And since products of engaged scholarship involve not only peer-reviewed written publications, but also applied products like government reports and expert advice and dissemination products like workshops and training guides - new methods of peer reviewing and judging this new form of scholarship needs development. Like a growing number of universities around the world, UCT should offer promotion and merit awards based on achievements in this work.

"It takes time," says Cooper, "but we can start by getting engaged with engagement."