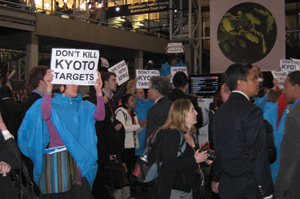 UCT researchers from the Energy Research Centre (ERC) joined others on the world stage in Copenhagen, Denmark in December 2009 to participate in the global climate change negotiations that were expected to produce binding new commitments on fighting climate change.

The group focuses on research into climate change mitigation, economics, greenhouse gas (GHG) inventories, the impact of potential future allocation schemes on SA, and capacity building. The ERC has been conducting research to inform climate policy at international, national and local level for more than a decade.

Diverse research interests include recent work on developing a 'lowcarbon zone' in the Western Cape, the possibility of and means by which economic transformation to a low-carbon economy in South Africa could be made possible. South Africa's Long-Term Mitigation Scenarios (LTMS) were based on research coordinated at ERC. Plans are afoot to take the LTMS experience to other developing countries.

Dr Andrew Marquard and Associate Professor Harald Winkler from UCT attended as members of the South African delegation, while other members of the research group went as observers to the proceedings.

Despite the worldwide hope that the Copenhagen conference would result in binding emissions targets and mechanisms for the transfer of finance and technology to the developing world, the multilateral talks resulted only in the Copenhagen Accord, a political agreement which has nonetheless paved the way for further discussions. Talks on the details of a global agreement are continuing in 2010, but it is not clear how the divides between developed and developing country positions will be bridged.