Vice-chancellor Dr Max Price praised staff members who have loyally dedicated long periods of their careers to UCT. At the Long Service Awards ceremony on 5 October, Price said it was unusual and special for people to stay with one employer for a long time in a world where staff often jumped from one career to another. The staffers' long service says something about the university and about themselves, he added. "You have shown commitment by serving your colleagues and a countless number of students. I thank you for that." The 78 awardees were honoured for 45, 35, 25 and 15 years of service, and together have clocked up 1 760 years of service. Among the memorable long-servers are traffic supervisor Harry Fisher (45 years) and receptionist Ella Waqu (25 years), who began her career at UCT as a tea lady. Their stories are below. 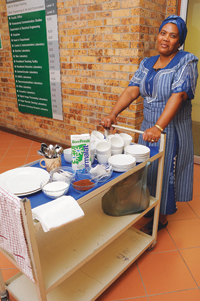 Back then: Ella Waqu began her 25-year career at UCT as a tea lady.

When Ella Waqu started her career as a tea lady at UCT 25 years ago, the first question her supervisor threw at her was: "Are you coloured or black?"

Afraid that she would lose the position, Waqu pretended to be coloured. That turned out to be her ticket to a warm welcome.

"UCT was not for blacks back then," she recalls. "Racism was rife, and there were very few black faces around."

The situation was such that for three years she had to speak either Afrikaans or English with her Xhosa-speaking colleagues in the catering services - as she saw it, to save her job. Things improved when workers were unionised in the late 1980s, and Waqu joined the Department of Electrical Engineering as a tea lady.

"From academics to support staff and students, people in this department were the first to show humanity to me. I always say it is a not by luck but a blessing that I work here."

The head of her department helped her stave off retrenchment when hundreds of employees from various services were outsourced in the late 1990s.

"My name was on the list. Then, I had just lost my father, and my mother was very sick. As I was a second-born, all my siblings were depending on me. No one knew about my troubles at home, but they still fought for me. I don't know how I can thank them properly."

While work conditions have improved, benefits - such as medical aid, housing subsidies and loans for staff - are now tougher than before, she says. Last year, Waqu was offered a position of departmental assistant.

Her wish for the future? To spend the rest of her working career at UCT. 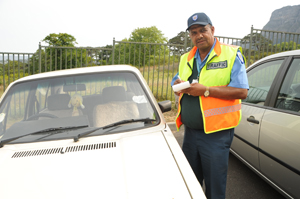 Ticket to ride: Traffic supervisor Harry Fisher was the only recipient of a 45-year long service award at the annual dinner this year.

Traffic supervisor Harry Fisher always tells his son "Be a man like your father, come to work at UCT".

For Fisher, working at UCT has always been an honour, which explains why the university was his first employer (he started at the age of 15), and probably his last (he's just a few years from retirement). At this year's Long Service Awards ceremony he was the only recipient of a 45-year service award.

"I so loved my job that I used to come to work even when I was sick, and on weekends, just to check how things were going," he says.

Fisher began his UCT career in the garden services, way back in 1965. When the gardening services were outsourced, he was offered a position in the Traffic Department.

In the old days, he says, people were caring and interested in the wellbeing of colleague's families.

"Now it is just 'hello and goodbye'."

Fisher says UCT has grown tremendously. The burgeoning campus and community have affected the traffic functions, with the lack of parking on campus a case in point.

"I often joke that students can't read. They will see a no-parking sign but still park, even in front of a door."

Among many memorable incidents, Fisher recalls when traffic officers ticketed an illegally parked vehicle for a month. "In each instance, a different traffic officer would issue a ticket for the same car until we realised that it had been stolen. Its number plate was different from its licence disc."