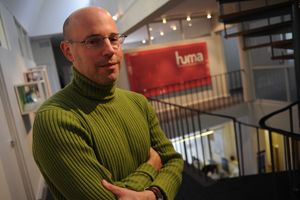 Jonny Steinberg is one of the new faces at the new Institute for Humanities in Africa, which launches this week.

It's all systems go for the new Institute for Humanities in Africa (HUMA) as it wraps up preparations for its official launch next week, just months after it was formally founded.

Nestled philosophically and organisationally between the faculties of Humanities and Law, the institute, helmed by founding director and professor of sociology Deborah Posel, has set up office atop the Centre for African Studies, and has also made its first appointments.

In addition it has compiled a jam-packed two-week launch programme of debates, discussions, lectures, presentations and a poetry reading that kicks off with a teasingly-titled discussion, Human, Humane, Humanist - also one of the institute's research thrusts - on Monday 11 October. It closes with a presentation titled Crime in the Townships: Experiences and perceptions, on Friday 22 October.

A stellar cast of participants - scholars, social commentators, talk show hosts, activists, writers and journalists among them - has been lined up for the two weeks.

The launch will also serve as the coming-out of two of HUMA's three new academic appointments - Associate Professor Shamil Jeppie, who joins the institute from the Department of Historical Studies; and multi-award-winning author and former Rhodes Scholar Jonny Steinberg. (Associate Professor Natasha Distiller, of the Department of English Language and Literature, has been appointed as chief research officer, but is on maternity leave and so won't take part in the launch.)

HUMA is a long-overdue initiative to foster interdisciplinary scholarship at UCT, says Jeppie. Of particular interest to him are the scholarly forays into yet-unexplored areas. "There is also a vision to work beyond the boundaries of the academy, in Cape Town constituencies not usually reached from the hill," he says.

Other than Posel, Steinberg is the only one of HUMA's academic staff not appointed from UCT ranks. While he's "nibbled at the edges" of academia - visiting positions at the University of New York and Oxford and a few fellowships - the institute will be his first immersion into full-time academia, and he's raring to go. "There are a couple of courses I want to put together and teach and that I'm really excited about," he says.

In turn, Posel is keen to see the institution up and running. She's already lined up - fingers crossed for the funding to come through - a doctoral programme for early in 2011.

And if her group seems modest in size, that's in keeping with the institute's 'interdisciplinary' ambitions, Posel notes.

"In some ways, we're small by design," she says. "The idea is that HUMA should have a porous boundary in relation to the faculties of humanities and law, and hopefully encourage active participation from our colleagues."

And if its launch programme is anything to go by, research at HUMA is likely to be distinctively varied.