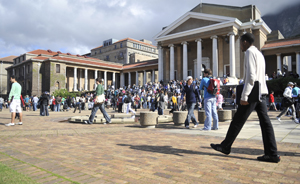 In spite of some shuffling and movement on the three major international university rankings released over the past few weeks, UCT remains the top-ranked African university. Most pleasing is that the Times Higher Education (THE) rankings placed UCT at number 107 in the world, the university's highest finish in any ranking yet.

The THE ranking is one of three making news at the moment, alongside the Quacquarelli Symonds (QS) World University Rankings and the Shanghai Jiao Tong Academic Ranking of World Universities (ARWU).

The THE rankings, released on 16 September, place UCT at number 107, well up from its 146th spot in 2009 when the THE and QS rankings were still combined. That suggests, however, that the two numbers cannot really be compared, as the ranking methodologies differed.

Now teamed with Thomson Reuters' Web of Science, the THE system uses 13 individual performance indicators and claims to cover all three core missions of a university in its new methodology, namely research, teaching and knowledge transfer. However, the highest-weighted category remains a university's 'research influence', measured by the number of times its published work is cited in other academics' papers.

Based on 12 000 journals listed in Thomson Reuters' Web of Science, taken over a five-year period, the citations data will be normalised to account for different volumes of citations between disciplines. For the first time, knowledge-transfer activities are included in an 'industry income - innovation' category (worth 2.5% of the total ranking score), based on research income from industry.

On 15 August, the QS World University Rankings system released its first results after the split between QS and THE. The QS system continues to rank UCT as the only university in Africa in the top 200, but the university has dropped from 146 to 161. (There were some dramatic changes at the top of the log as well, with Cambridge taking the number one spot from Harvard, the highest-ranked university since 2004.) UCT will study the changes, although it is considered a small fluctuation, especially since half of the weighting of this ranking is based on opinion polls (academic peer review, 40%; employer/recruiter review, 10%), the other indicators being student-faculty ratio, 20%; citations per faculty, 20%; international faculty, 5%; and international students, 5%.

But not too much about UCT's performance should be read into that, noted vice-chancellor Dr Max Price in an op-ed piece in the Mail & Guardian on Friday 24 September.

"For example, UCT could be 107 this year, and make significant improvements such as recruiting more postdoctoral scholars and leading international scientists, increasing its research articles further– but if the university at position 110 has improved slightly more than UCT, then UCT will drop - though this would not reflect any deterioration."

On 9 September, the results from the Academic Ranking of World Universities were released by the Shanghai Jiao Tong University. UCT was once again ranked as the top university in Africa (and maintained its place in the range 200 to 300). The indicators used by the Shanghai Jiao Tong ranking are explained on the ARWU website: "ARWU uses six objective indicators to rank world universities, including the number of alumni and staff winning Nobel Prizes and Fields Medals, number of highly-cited researchers selected by Thomson Scientific, number of articles published in journals of Nature and Science, number of articles indexed in Science Citation Index - Expanded and Social Sciences Citation Index, and per capita performance with respect to the size of an institution." While the results are satisfying by and large, in his op-ed Price cautioned against inherent biases.

The new Times Higher Education system, for example, uses a combination of 13 criteria weighted in a particular way, which has not been used before. They place strong emphasis on research productivity and impact, the ability to attract research grants, the quality of staffing, internationalisation, and perceptions among the international community of the quality of graduates.

"UCT does well on this globally and in relation to Africa (there are no other universities from the continent in the top 200) because of this particular bias, which happens to coincide with a core element of UCT's mission; viz, to be a research-led university," wrote Price.

"The danger of ranking systems, especially where they are designed with an eye on developed country universities, is that they may lead to behaviours and redesign of strategy to improve in the rankings rather than do what's right for the local setting."

That said, the rankings come with benefits that cannot be overlooked, Price noted.

"We cannot ignore the rankings because, for all their flaws, people the world over pay attention to them. This can be turned to the advantage of the university and the country."

His sentiments were endorsed by Professor Danie Visser, the deputy vice-chancellor responsible for research.

Though mindful of the flaws inherent in all ranking systems, he said, UCT's rankings reflected, in the first place, the quality and dedication of its staff and students.

(Read the vice-chancellor's op-ed that appeared in the Mail & Guardian on Friday 24 September.)