Ngwenya in the hot seat 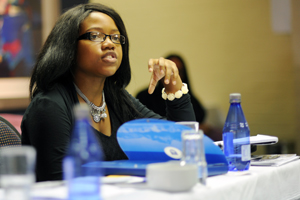 Taking office: Amanda Ngwenya has been elected SRC president for 2010/2011.

Amanda Ngwenya of the Democratic Alliance Student Organisation (DASO) has been named the new president of the Students' Representative Council (SRC) for the 2010/2011 term.

This puts the first three most senior positions on the committee in the hands of women. (These positions are occupied by men in the current SRC).

The new leadership takes office on 1 November. September and October will serve as a handover and induction period.

(Interviews with Ngwenya and members of her council will be published in the next edition of Monday Paper.)