Wing It flies higher and higher 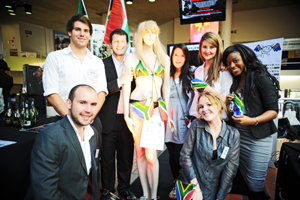 It is probably one of the most successful business stories on campus. A group of UCT students turned a R50 loan into R10 000 in just one week, and swelled that to over R250 000 six months later.

Now members of Wing It, made of a group of UCT students on the Postgraduate Diploma in Entrepreneurship (PDE), are on course to record the highest turnover in the programme's history (The current record is around R50 000). The PDE Genesis Project requires students, from diverse backgrounds and often with no business knowledge, to network, become part of a team of seven and develop a business for the year.

In what deputy vice-chancellor Professor Jo Beall described as a "fantastic example of the best teaching practices", the aim of the course is to give students first-hand experience of running a business, and to promote the use of green (environmentally friendly) and brown (community upliftment) initiatives in the development of businesses.

On 11 August, the PDE hosted a Genesis Product Launch, and the eight teams participating in the programme showcased their businesses and products, working to the theme of "original, green, fashion, student market", according to student Ashleigh Hayworth, who organised the launch with fellow student Dave Schilperoort and the rest of the launch committee. Companies such as Wing It, Kalabash and Back Cherry were selling anything from funky scarves and pillows to shoes and pouches. What made Wing It so successful?

It all started in February when group member Mike Earp wanted to buy the now popular car socks - a new product at the time - in Johannesburg. He found that the company manufacturing the product was waiting for stock from China and would only receive it just before the 2010 Soccer World Cup in June.

"I thought the product had great potential, and realised that for three months it would not be available on the market," Earp explained.

Back at UCT, he ran the idea past his members who agreed to manufacture the socks locally. (Before then, the group had raised R10 000 - less than others - within a week, selling pancakes and boerewors rolls in the Jammie Plaza. There were other groups who made more than that during that period). Soon their car socks were selling like hotcakes.

"We saw a gap in the market, took the initiative, grabbed hold of the opportunity. Should we have waited, we may have missed the boat," Earp notes.

One big clothing store ordered 10 000 units, and Earp and company used up all their capital to meet that order. But the store didn't pay up for three weeks, leaving Wing It with a cash flow problem and unable to keep up with demand - just before the start of the World Cup.

This was among challenges the students faced, but Wing It has proved that anyone can open a successful business, said Bentolina Nnadi, another member of the group. Leadership, teamwork and flexibility are some of the lessons they learnt along the way, she added.

And what is brown and green about their business?

Wing It used street vendors to sell their products, and, ever since car socks are no longer in demand, they have recycled the materials into bikinis, bags and pencil and sunglass cases - all of which have created much opportunity for the business moving forward.

You can view pictures of the Genesis Product Launch on Flickr and watch the group interviews on YouTube.