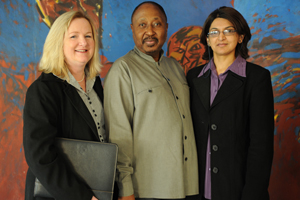 Caretakers: Margie Tainton (left) and Miriam Hoosain (right), with deputy vice-chancellor Prof Thandabantu Nhlapo, will step in as acting executive directors until a successor to Khotso Raphoto is appointed.

In discussion and in his letter to the vice-chancellor, Dr Max Price, Raphoto had indicated that a combination of factors influenced his decision. One of the most important was that he felt he did not have sufficient support within the HR department and from certain key stakeholders in the university to bring about the changes that are required in HR at UCT.

He wrote: "Having taken these concerns into account, given the difficulty in continuing to work under such conditions, and in the best interest of all concerned, I have decided to tender my resignation."

Price noted in a recent message to staff that Raphoto had put the interests of the university first. "The executive is, and we should all be, grateful to him for his contribution over the last two years, and the enormous integrity with which he has dealt with the current difficulties in HR," Price wrote.

Speaking at the PASS Forum on 22 July, deputy vice-chancellor Professor Thandabantu Nhlapo announced that the executive is currently reviewing this and other developments in the HR department.