EDU WATCH Education news from Africa and the world 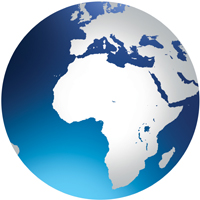 A worldwide trend of falling state investment and rising tuition fees will prompt intense competition in the "globally traded commodity" of higher education - and the sector must prepare for the global advance of private providers. This was the message from presentations at the UK Council for International Student Affairs annual conference.

Former UCT deputy vice-chancellor and current vice-chancellor of the University of Salford, Prof Martin Hall (@VCSalford), is the first UK-based VC to personally use Twitter, The Times Higher Education reports. Following on his heels is De Montfort University's VC Dominic Shellard (@DMUVC) who joins university heads from around the world in the twittersphere.

Ireland's prime minister, Brian Cowen, has announced the largest single investment of Funding for Research ever made in the country. It will amount to EUR360 million over five years, comprising EUR297 million from the state and a further EUR63 million from private sources.

The recent discovery of oil in Uganda has prompted the Kenson School of Technology, a Trinidad and Tobago-registered organisation, to train Ugandans in soft skills required for the industry. This initiative is expected to address the lack of technical skills among Ugandans.

South Africa should introduce US-style community colleges at which youths could be prepared for further study, said senior Human Sciences Research Council official Michael Cosser. He argued that community colleges would remove the pressure on universities to spend increasing portions of their budget to bridge the gaps between university and high school education.

The presidential campaign in Rwanda this month sparked a campus-wide ban on all forms of political activity at the National University of Rwanda. The rector, Prof Silas Lwakabamba, explained that the measure was taken to ensure a peaceful election period.

Duke University in the US has suspended assoc prof of medicine, Anil Potti, after learning that he falsely claimed to be a Rhodes scholar. Potti, a cancer-genomics researcher, listed the prestigious scholarship in an application for a research grant from the American Cancer Society.

One in 20 essays submitted by applicants for medical residencies at a prestigious Harvard teaching hospital in the US contained evidence of plagiarism, according to a study published in the Annals of Internal Medicine. The authors studied nearly 5 000 personal statements from hospital residency applicants.