When work is a pain in the neck 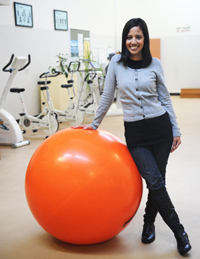 Hard worker: Naila Edries wanted to see if she could improve health and wellbeing among clothing workers.

The clothing manufacturing industry is a stressful working environment, a snarl of long hours, uncomfortable working quarters and the ever-looming threat of retrenchments possibly behind the industry's notoriously high absenteeism.

In addition, the repetitive nature of the work triggers a clutch of chronic musculoskeletal ills, from lower-back pain to sore necks and shoulder aches. And while standard physiotherapeutic interventions are common, they are often of the curative kind that tackle the symptoms but not the causes.

Naila Edries, who graduates with a master's degree from the Division of Physiotherapy this week, wanted to see if a new kind intervention could make a difference. Opting for a more preventative approach, she applied what's known in physiotherapy as cognitive behavioural therapy, in which patients are encouraged to identify problems and change their thinking and health-risk behaviour.

For her study she randomly divided 80 workers from three clothing factories in the Cape Town metropole into two groups; a control group of 41 who were invited to a once-off health promotion session, and an experimental group of 39 with whom she spent one hour a week for six weeks. Each hour would include an information session in which she discussed topics such as health risks, goal setting, ways to start and sustain an exercise programme and the like, as well as a 30-minute aerobic and stretching exercise session.

Edries didn't expect so many significant improvements over a programme of just six weeks, so she was pleasantly surprised by the outcome.

"Overall, the implementation of the Employee Wellness Programme, based on the principles of cognitive behaviour therapy, was beneficial in improving the employees' perceived health-related quality of life, the amount of exercise the participants were engaging in, perceived stress levels and a significant reduction in body mass index," says Edries.

Although the experimental group fared better in all areas than those in the control group, there was also an overall reduction in absenteeism over the study period.

These results may well be a case of the programme being much more than just the sum of its parts.

"Because the study was implemented during a period of considerable tension amongst the employees of the clothing industry," says Edries, "the workers thought it was encouraging and motivating that the employers allowed the study to take place and approved the time off for it."