Kids have a mountain to climb in Lavender Hill 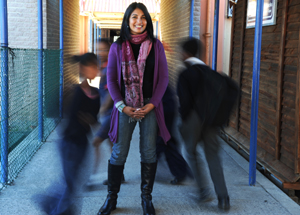 Downtown: In trying to understand children's behaviour in Lavender Hill, Dr Roshan Galvaan got to grips with their contexts.

Over the 10 years that she's worked in Lavender Hill, Dr Roshan Galvaan has learnt a thing or two about the kinds of choices made by children in this southern Cape Flats suburb, ill-reputed for its crime, gangsterism and unemployment.

"Some of the children were sometimes described in pathological terms, but it wasn't that - it was just that they didn't know a different way of being. So while they were behaving in ways that looked maladaptive, they were actually just trying to cope with the environment they were confronted with," Galvaan said back in 2003, four years into Facing Up: Creating Opportunities, a programme set up and run by her and other occupational therapists and students to help troubled school learners in Lavender Hill.

This week, Galvaan graduates with a doctoral degree from the Division of Occupational Therapy, work in which she has explored not just the children's behaviour and choices, but also how and why they're made. In this ethnographic study she tracked seven primary-school children - aged around 11 when the work started - and their activities for two years, spending as much time as she could with them, their families and peers.

"So the picture that one has of Lavender Hill was confirmed," Galvaan says.

Her study filled in the missing parts of that picture, in more ways than one. Other than just following them around, she also handed the kids disposable cameras, asked them to take snaps of themselves and their peers, and then had them speak to those shots (A technique that's much better, she found, then just bombarding them with questions in an interview.)

She learned that the children's decisions were influenced by their peers. That families often abdicated responsibility to those peer groups. That, though they attached themselves to taxi drivers, they generally avoided the company of 'judgemental' adults. That spending hours wandering from house to house deciding how to spend their time was in itself a treasured activity. That they self-fulfilled their low expectations of themselves. But also that they were innovative, intelligent and street-smart, whether it's making a few rand, getting together ingredients for potjiekos, or hustling a lift to the nearby Muizenberg beach.

The main influence on the children's lives, though, was Lavender Hill, says Galvaan. That includes everything from the school system, their family structures, their peer groups and the subcultures they are part of.

"If you want to understand the children's choices, you have to find out more about the context they're in."

But that, she admits, could take even more time.