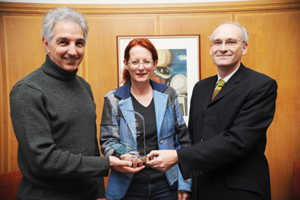 Taking charge: (From left) Profs David Britton (right) and Margit Härting of the Department of Physics made significant advances in the field of printed electronics, netting them an IDTechEx Academic R&D Award. They were photographed with VC Dr Max Price.

At the gala dinner for the IDTechEx Printed Electronics Europe Awards 2010 in Dresden, Germany, on 13 April, UCT's Professors Margit Härting and David Britton were the butt of some gentle but pointed barbs, mostly about the long odds of them collecting any prizes that evening. A few minutes later, the dark horses stunned their dinner companions when they were named winners of the competition's Academic R&D Award, beating out competitors from some of the world's most illustrious universities.

Their rivals would perhaps not have been so dismissive had they read the pair's nomination form, or been aware of Britton and Härting's breakthroughs in the ever-burgeoning field of printed technology. Here, in printing techniques akin to traditional printing, electronic ink is printed onto a substrate (the material on which an electrical circuit is built) where it works as a semiconductor that can carry electrical charges.

The potential applications for printed electronic products are enormous. These range from use in solar cells (where engineers are keen to use thinner and cheaper materials) and animated billboard posters (imagine a paper-thin poster that lights up or runs videos), to packaging (that can guarantee freshness) and smart fabrics (such as shirts that monitor muscle fatigue during sports training).

Starting with the very basics and working on printed technology in the solid-state and materials physics group in the Department of Physics from the early 2000s, the two have made envelope-pushing advances from the get-go.

Among the first - and this breakthrough would underpin the rest of their work - was the production of semiconducting inks using silicon nanoparticles. Capping that, they became the first scientists in the world to print that nanoparticle ink onto paper and other substrates, and have it work as a semiconductor at room temperature.

Until Härting and Britton's discovery, engineers were stumped by the problem that silicon nanoparticles would react with oxygen in the air and become unstable. They would then have to resort to further processes such as sintering, in which particles are bound together by heating them in a furnace. This leads to worries about which materials are suitable as substrates.

For good measure, Britton and Härting's nanoparticle ink was stable in air for a period exceeding two years.

"We could do that because we understood the basic physics and material science of our nanoparticles," explains Britton.

Given the ink's countless potential uses, it's little wonder the two have attracted the attention of hordes of potential investors and industrial partners. They've already collected an impressive wad of non-disclosure agreements, reports Britton.

And all this at a smallish university at the foot of Africa.

The pair may have been short on resources, but location counted in their favour, argues Härting.

"In a so-called first-world environment, you see things differently," she says. "You go into the stream where everybody else is going. In another environment, there are no such influences, and you can go for your own ideas."

And while they are pursuing very specific commercialisation options - but can't say what - they're willing to share their knowledge with others in Africa. In partnership with the United States Agency for International Development, they're hoping to collaborate with universities in Rwanda and the rest of Africa to begin work on those paper-thin solar panels, for example.

Watch them drop a few more jaws at gala dinners over the coming years.