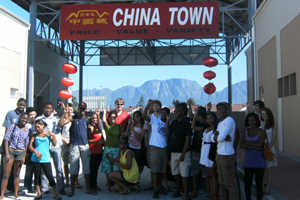 Patter of little feet: The start of the 2.5km fun run on University Avenue, ahead of the Old Mutual Two Oceans Marathon on Saturday 3 April.

Among the preludes to the Mother City's Old Mutual Two Oceans marathon and half-marathon, which finish on UCT's rugby fields each year, were the 56m Nappy Dash, the 300m Toddlers' Dash and the 2.5km and 5km fun runs on Easter Friday, 2 April, attracting runners and walkers of all ages.

In a festive mood and in near-perfect weather, hundreds of moms, pops and children jostled at the start of the 2.5km and 5km fun runs on University Avenue.

Among those who donned UCT colours for Saturday's half-marathon (on 3 April) this year were vice-chancellor Dr Max Price and deputy vice-chancellor Professor Danie Visser.

Price completed the half-marathon (on 3 April) in 02:06:29 before being whisked off for an interview with the SABC. Visser completed his Two Oceans 'half' in an equally respectable time of 02:39:58.

(Go here for footage of the vice-chancellor's interview on SABC on completion of the half-marathon.)