Ikeys to meet Maties in Varsity Cup final yet again 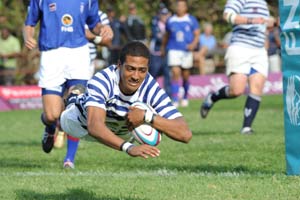 It wasn't the most exciting or prettiest of matches, but UCT Ikey Tigers' workaday 27-21 home win over University of the Free State's Shimlas in the first of the two FNB Varsity Cup semi-finals on 22 March has set up a tantalising final against the University of Stellenbosch next Monday.

Actually, yesterday's scoreline flattered the Shimlas, who never really looked like they were going to get back into the match after UCT took a healthy 19-0 lead at half time (making good if not full use of a tailwind on yet another windy Cape Town day), a margin they stretched to 24-0 early in the second half. Three late tries by Shimlas - the last in the dying moments of the game - lent some respectability to the final score.

"We knew the game was ours once we scored that try early in the second half," said coach, John Dobson, afterwards.

Man of the Match Marcel Brache, Marcello Sampson, JJ Gagiano and Therlow Pietersen (all standout performers on the day) touched down for UCT, while Matthew Rosslee kicked a penalty and a conversion and Douglas Mallett a conversion. 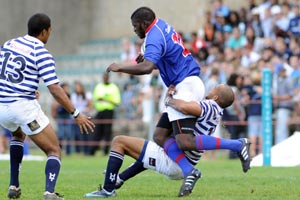 While the Tigers camp was rightly jubilant after the victory, the side again squandered too many opportunities, and they should easily have doubled their score. And as has become custom, the kickers' success rates were well below par.

"We left some points on the table," remarked Dobson.

It's those kinds of niggles the side will have to sort out before the final in Stellenbosch next week, especially considering the home team's form this campaign. Maties were again rampant last night, crushing North-West University's Pukke by 47-11 in the other semi-final.

On the other hand, Maties will likely be apprehensive after UCT outplayed them in their clash two weeks ago. And Brache, Pietersen and a couple of other UCT players seem to be hitting their strides at just the right time.

In the picture above, UCT's Marcello Sampson gets a tight grip on Shimlas' Jamba Ulengo.