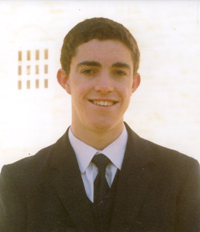 Hero: Keith Grainger will be honoured at the upcoming UCT open squash tournament.

UCT will remember the late Keith Grainger, an up-and-coming young squash player who succumbed to cancer in 2001, when it hosts the Keith Grainger UCT Open from 26 to 28 February.

Grainger's sister Natalie, current world number five and former world number one, has confirmed that she will travel from the US, where she's based, to take part in the competition. Natalie, who is the president of the Women's International Squash Players Association, will be joined in Cape Town by parents Jean and Chris, who still play competitive squash for the Gauteng master's teams.

"We hope that Keith's story of courage in adversity – especially through squash – will be a legacy to help others, said mother Jean.

Keith Grainger, an under-13 national school champion, was a member of the UCT squash club between 1999 and 2001. He was diagnosed with bone cancer in the knee during his matric year, and lost his leg. Despite this, he became an active member of the UCT club, in more ways than one – he could often be found hitting balls with beginners, he served as manager for the club's tour to the US in 2000, and he even played a couple of matches.

He died in September 2001, and was posthumously awarded the UCT Chairperson's Award for sport a month later.

Entries (which have been pouring in) for the Keith Grainger UCT Open close at 12h00 on Friday 19 February. It's expected that some of the top players in Cape Town will enter, but the event is open to all.

Entries may be emailed to Kerr Rogers.