Second-best of starts for UCT 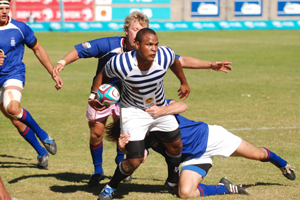 Stellenbosch University's Maties may be setting the pace in the FNB Varsity Cup following their 68-20 thumping of the Nelson Mandela Metropolitan University Madibas on match day one on 1 February, but UCT's 30-all draw against Free State University's Shimlas was the Ikey Tigers' best start yet in the tournament.

Having lost their two previous opening matches, the Ikey Tigers would have been keen to get their 2010 campaign off to a better start. They almost didn't, earning a two-point draw only thanks to an injury-time penalty by Doug Mallett, son of former Springbok coach Nick Mallett.

To their credit, however, the Ikey Tigers showed some fighting spirit to rally twice in the match, first after trailing 13-25, and then having to make up a 20-30 deficit. Mallett was something of a UCT hero on the day, converting two tries and booting over that match-saving penalty after coming on late in the second half as a replacement flyhalf for Matthew Rosslee.

The Ikeys were said to be their own worst enemies on the day, gifting Shimlas a brace of penalties and heels against the head.