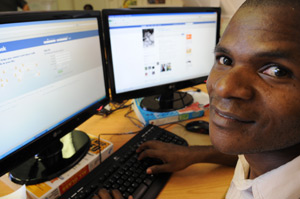 Zimbabwean-born Patient Rambe has been spending a lot of time on Facebook.

Elementary, you might say, but for his PhD in Educational Technology, which he will receive on 18 December, Rambe has examined the dynamics of power and learning that exist in student/lecturer relationships via social networking sites.

In his thesis, The impact of using social networking sites on academic relations and student learning in a university setting, Rambe looks at how sites like Facebook have empowered students from disadvantaged backgrounds, many of whom have felt a sense of inferiority when faced with experienced educators and their more capable peers from privileged backgrounds.

"I assessed the asymmetrical relations of power between individuals; you know, the expression that all people are equal but some are more equal than others."

More importantly, Rambe found that, because of factors such as learning problems and language problems, learners "can't access the lecturer because of fear, lack of confidence and limited capabilities".

To top it off, class sizes are larger - some with up to 450 students - making it harder for lecturers to communicate with students on a one-on-one basis.

Rambe contends that educators can take advantage of social networking sites to interact better with their students, and use them as diagnostic vehicles to unpack the kind of problems that students often encounter.

The sites also present an opportunity for a shift away from the traditional instructivist mode of teaching towards constructivist generation of knowledge.

"My feeling was that social networking sites would provide a knowledge construction environment where students had control of what kind of information they generate, who to interact with and in what dimensions."

Using a critical ethnographic method of inquiry, Rambe joined a large Facebook feedback group to study the way the students interacted with each other and with their lecturers.

"You might be surprised to learn that there were some students who were reserved and withdrawn in class, but very vocal online."

And different categories emerged. There were the 'cognitively proximate', or 'trailblazers' - a highly active and well-networked group that used a diversified range of social networking platforms, not just Facebook, to find information. For this group the role of the lecturer for access to and validation of information was increasingly diminished.

These last three groups failed to leverage the balance of power, and actually increased their dependence on the lecturer for academic support.

"I strongly believe that social networking sites will become a permanent feature of the 21st century that will impact tertiary learning relations," Rambe said. "But it's up to the way we appropriate these sites that will determine the amount of academic leverage we will attain."