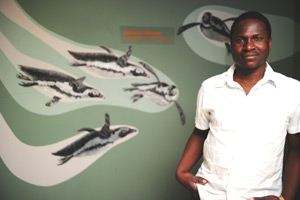 Fate sealed: Azwianewi Makhado has been monitoring the harm that Cape fur seals have caused to some local seabird populations.

The hours he spent baking in the sun on a group of seabird islands (Prince Edward Islands, off South Africa) produced some worrying findings for Azwianewi Makhado's doctoral research. Specifically that small bands (dare we call them gangs?) of adolescent Cape fur seals were decimating seabird populations on Malgas, Dassen and Dyer Islands, and at Lambert's Bay. It has been notably Cape gannets, Cape cormorants and African penguins that have suffered under the seals' attacks, Makhado explains. For example, over the 2004/2005 breeding season, the seals killed some 11 000 fledgling Cape gannets, totalling around 83% of chicks. That bodes ill for vulnerable gannet numbers when it's the chance of the (now) handfuls of surviving chicks to breed four or five seasons later. In addition, in one year the seals killed some 8% of adult penguins, a group already under threat. (Penguin numbers have dropped from about 23 000 breeding pairs at Dyer Island in the 1970s to about 2 000 pairs since 1997.) In response, Makhado, a marine scientist (with Marine and Coastal Management, responsible for the management and conservation of seabirds on the islands), and his supervisors have come up with a set of recommendations. As the killing of seabirds is a learned behaviour (it's not for actual feeding), this will involve policing the islands and removing the offending seals. "These rogue seals are a small percentage of the overall population," Makhado stresses.