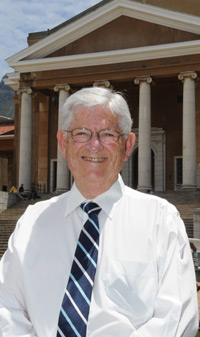 Like a good red wine, some students just get better with age.

Take Kenny Penkin, a sprightly 76-year-old from Sea Point, who will be clinching his master's degree through the Faculty of Commerce on 17 December.

A chartered accountant by trade, Penkin made the decision to return to UCT when he was 74.

"I was inspired by my love of learning and also to overcome the bogey of my matric, when I had to write a supplementary examination in order to get a varsity pass. I thoroughly enjoyed my Bachelor of Commerce degree at UCT and obtained quite a few firsts and seconds, particularly in taxation, accounting, costing, and company law."

Penkin passed the CA Board exams a few days before his 21st birthday, breaking the record for the youngest person to qualify as a CA in South Africa. He then went on to build up a practice, employing 60 staff and eight partners at its peak. He also spent nearly a decade serving Cape Town as a councillor.

But the learning bug kept biting and in 1986 he obtained a Certified Public Accounting degree in Israel. When his son Jonathan, also a UCT graduate, earned his third degree, Penkin decided that it was a matter of pride to pace him.

For his thesis, he explored the hot topic of remuneration committees and executive compensation, as little had been written on the subject.

"After the gruelling master's degree, I have so much to catch up on. I'm in arrears on my reading and need to continue with my religious studies. I'm also looking forward to learning chess with my grandsons, updating my family tree, studying modern Israeli history, swimming, walking and travelling."

As to his main achievements in life, they are his four children: Jacqui and two granddaughters own Charly's Bakery, Beverley (BSocSci, 1983) manages a CinÃ©mathÃ©que in Jerusalem, artist Tammi is publishing a book and Jonathan is in Hong Kong. The competition is now on for the grandchildren to outstrip the older generation with degrees. And Penkin needs to answer the question on everyone's lips: "When are you undertaking a PhD?"