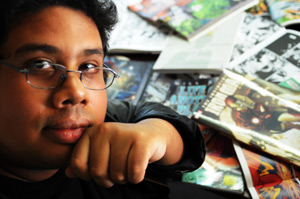 You have to be on your toes when speaking about comics to shathley Q, PhD candidate Shathley Abrahams' preferred operating handle.

Not for him the pedestrian concerns about Superman's origins or Batman's daddy issues, although he can wax eloquent on these topics too, if prompted. Instead, Q's talk and his doctoral thesis are peppered with references to Chomsky, Hume, Kant, Warhol, Benjamin Whorf and linguistic determinism, apophenia (seeing patterns in random or meaningless data, just like Neo did in The Matrix), manga master Osamu Tezuka, Marshall McLuhan, Stuart Kauffman, emergence, Freud, Foucault, Marx, Descartes and, just in case you're feeling a little at sea, Stephen King.

As a South African pioneer in the study of comics and its relation to the philosophical canon - he was the first African comics scholar to present a paper at the Congress of the Americas, back in 2001 - Q is mixing it up in his doctoral thesis.

As a scholar of popular culture with an appreciation for its many interdisciplinary opportunities, the main argument of his doctoral thesis is that those perennial questions of philosophy on identity, meaning, self, space, duty, time, representation and a score of others could be tackled through the oft-disparaged comics medium. After all, Q says, humans told their stories in pictures long before anything resembling prose came along. (And what were the Pharaohs if not superheroes?)

So, if we understand the world through the constraints of language, as Whorf would have it, how would our knowledge of the world be different if we viewed it through sequential pictures and words, instead of just words?

"What would the philosophical conundrums that have come up look like if we saw them through comics instead of through prose?"

Q asks. "The subject matter is interesting, yes, and on the surface looks like comics, but there is something profound and deeper there."

And, to press his points home, Q closes his thesis with a little fiction in which a fictional character, also named shathley Q (a comic-book writer, naturally), reinvents and, yes, saves the notions of popular culture and literacy in a dystopian world where the Renaissance never happened and Gutenberg's printing press was not even a footnote in history.

(For those with a more learned interest in the genre, find some of Q's writings at popmatters.com, where he reflects on the sociology of superheroes - a topic covered in his doctoral thesis - and comics in the age of social media, among other issues.)