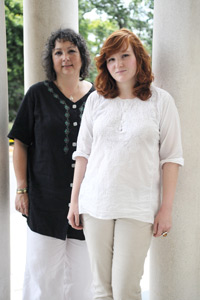 Graduation day this week will be a more-than-special day in the Rogerson household. Both mom and daughter will receive degrees - in two completely different faculties.

Christine, who turns 50 next year, is systems support officer at UCT's Finance Department and had been studying part-time through UNISA before being invited to convert to a BCom Honours at UCT. She completed her degree with a first-class pass, and came top of her class.

Jennifer, for her part, is moving on to a master's degree next year, and although Christine was accepted for her own master's, she decided against it due to work pressures.

Asked if her daughter was proud of her achievements as a "mature student", all Christine would say was: "Well, you know what kids are like ... it's just mom."

Christine, who received a long service award from UCT this year after 15 years at the university, was one of the oldest students in her class, and says many younger students treated her as a mother figure, turning to her frequently in times of crisis.

She says it was tough finding the time for her studies while employed in UCT's Finance Department, but it was all worth it in the end.