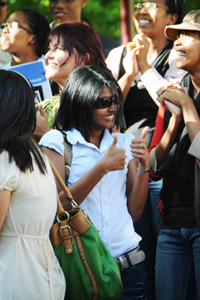 It was good news for the 273 fledgling healthcare practitioners who gathered in the Barnard Fuller quad for the Faculty of Health Sciences' annual results on 30 November. Among the 168 new doctors who will graduate on 14 December is Nevadna Singh (left), who won the MBChB Gold Medal for her record of 75% or above throughout her medical studies.

This week, thousands of UCT students will file through Jameson Hall, capping their studies with one final ritual.

As the university intake has grown noticeably over the past few years, it's no surprise that the approximately 4 700 students - this was the tally at the time of going to print - who were eligible to graduate this year is a total substantially higher than the 4 507 in December 2007 and the 4 489 in December 2008.

The Faculty of Commerce, including the Graduate School of Business, will graduate around 1 310 students, awarding over 700 bachelor's degrees, and more than 400 postgraduate diplomas.

The Faculty of Engineering & the Built Environment will cap 650 students, awarding over 100 master's, 120 honours and 500 bachelor's degrees.

Graduates from the Faculty of Health Sciences number 450, and qualifications will include 25 doctorate degrees and over 70 postgraduate diplomas.

The Faculty of Humanities, still weighing in as the university's largest faculty, will - cap 1 600 students over its three ceremonies. These include 330 honours and around 750 bachelor's degrees, while over 300 students will receive undergraduate certificates and diplomas.

The Faculty of Law will award 130 qualifications, including three doctorates, 37 master's degrees and 87 bachelor's degrees.

And finally, the Faculty of Science will boast over 550 graduates, including 40 who will receive their doctorates, 159 honours-degree recipients and 300 bachelor's qualifiers.